Candidate App is used to track the nomination/ permission application status. Once the application is registered, the periodic status updates are available via notifications. 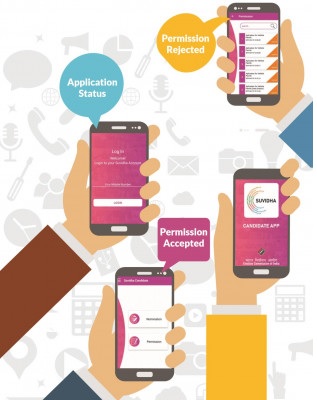 Earlier candidates and political parties were informed about their candidature and permissions status only by way of paper. There was no online method for intimation and the candidate had to visit the office to get the details of their permissions.

Presently nomination and permission is filed through a web application namely ENCORE. To make it accessible for candidates so as to check the status and get the updates of his application, the android app can be downloaded from the Google Play Store called ‘Candidate App’.

The link to download the application is https://play.google.com/store/apps/details?id=suvidha.eci.gov.in.candidateapp&hl=en_IN. This mobile app allows candidates to check the status of their nominations and permissions filed via ENCORE.

Candidate App is used to track the nomination/ permission application status. Once the application is registered in ENCORE by the Returning Officer, the periodic status updates are available via notifications.

Outcome of the Application

The application boosts the transparency initiatives of the ECI. The candidate gets to know on a real time basis whether their application has been rejected or accepted. In future, the candidate can fill in the nomination and receive permission directly from the mobile app.

About ECI:
The Election Commission of India is an autonomous constitutional authority responsible for administering Union and State election processes in India. The body administers elections to the Lok Sabha, Rajya Sabha, State Legislative Assemblies in India, and the offices of the President and Vice President in the country.