You are here: Home > Central Government
All posts from boothapp.eci.gov.in

Booth App is an integrated app of the ENCORE application, which facilitates in faster identification of voters using encrypted QR code from the digital marked copy of the electors. 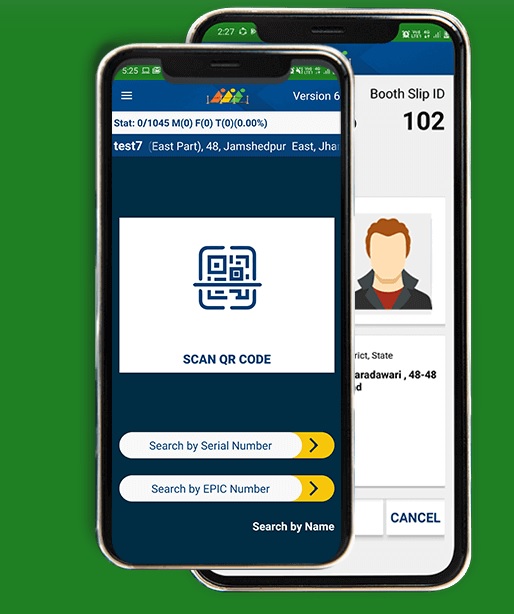 This reduces the queue, helps in faster polling and allows error-free recording of two hourly poll turnout with minimal intervention.

** Link up your mobile number with that of Voter ID card to get Digital Photo Voter Slip on the Personal Vault of ‘Voter Helpline’ Mobile App.
** You can carry your mobile phone inside the polling station upto Polling Official using a booth app, for faster verification.
** This is an experimental feature to be used only on designated polling station under booth app. The phone would not be allowed inside the polling compartment.

Once the QR code is scanned, the mobile app correctly and instantly identifies the Voter and presents to him the colored photograph along with the complete electors details. Marking attendance is instantly done through the booth app. The process is simplified and adds to the authenticity. In future, the Polling Official will not require to carry bulky paper documents containing the Voter list.

The Booth app auto-detects the duplicate entries and prevents repeat voters from entering the polling station. The Polling Official get a loud sound on his mobile phone. The duplicate voter cannot be allowed to be entered into the Polling station as booth app will not accept it.

Using Artificial Intelligence and advanced mathematical models, the booth app calculates the queue at the polling station. This information is then pushed to the Voter Helpline Mobile app.The Voter using their mobile phone can check the current queue and plan their visit accordingly.

The booth app is configured to connect to the central ECI server in a minimalistic way and transmits the data in the encrypted manner. This helps in giving meaningful information about gender wise polling, age wise polling, speed of polling, traffic during the day and other poll related events and incidences. This helps the Election officers in making right decision in right time.

Real Time Event and Incidence:
The Presiding officer also uses the booth app to record poll incidences and events. The PRO can register any poll incidence like riot, Fraudulent defacing, destroying or removal of the list of notice or other documents at the polling station, Natural calamity, Booth capturing, Failure of voting machine. The incidence reported by PRO is flashed to the Sector Magistrate, District Election officer as a red alarm.

EVM / VVPAT inventory Management:
The booth app has a module for sector magistrate who is responsible for carrying reserve EVM/ VVPAT machines. Upon reporting by the Presiding Officer through the booth app itself, the sector magistrate gets an alert and the inventory replacement are recorded on the app. This way the decision makers get to know the statistical report and the reason for replacement instantly compiled on the dashboard.

Real-time information of Polling party through GIS:
** The polling party location is also tracked on the map view.
** This helps in correctly locating the polling parties.
** The Presiding officer is also tracked from the booth app and thus immediate intervention is provided.
** The sector magistrate location is also visualised on the GIS dashboard, thus in future the last mile information about reserve machines will be available for decision makers.