The postal ballot paper to the service voters was sent by the Returning Officer after printing the ballot for each and every service voter of the Constituency, and then put it in an envelope inscribed with the address of the Record Office of each service voters. 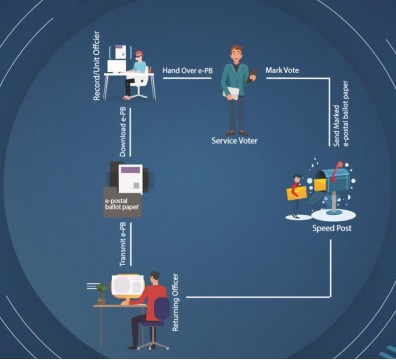 This takes a lot of resources, efforts and time, thus increasing the chance of mistake, since each ballots need to be printed and put in the correct envelope.

Since, the last part of electoral roll was not upto date, therefore, the Record Officer faced a challenge in identifying the present place of posting of the service voter thus failing in delivering the postal ballot to the concerned service voters in time. This led to low turnout of the service voters of about 3-4% in the General Election to Lok Sabha 2014.

Electronically Transmitted Postal Ballot System (ETPBS) is the one-way electronic transmission of the Postal ballots to the Service Voters. The Service Voter then cast their vote and send it to the respective returning officer via Post.

The complete process is secured by way of multiple checks and transmission protocol to ensure safe transmission. Upon receipt of the postal ballot at the counting centres, the returning officer validates the receipt by a series of QR codes with that of the transmitted system.

Returning Officer generates ballot paper electronically by a specific desktop application. The list of the candidates is punched along with their party names. This ballot then gets encrypted in the system is ready to be sent. The first functionality is the ability to generate the postal ballot online for transmitting through ETPBS.

Through ETPBS system, the ballots are automatically assigned to Service Voters based upon their constituency and get then gets transmitted. The unit officer downloads the Postal ballots on behalf of the service voter. These downloaded ballots will be password protected.

Thus ETPBS transmits the Postal ballot from the returning officer to the service voters electronically by a series of security protocol. 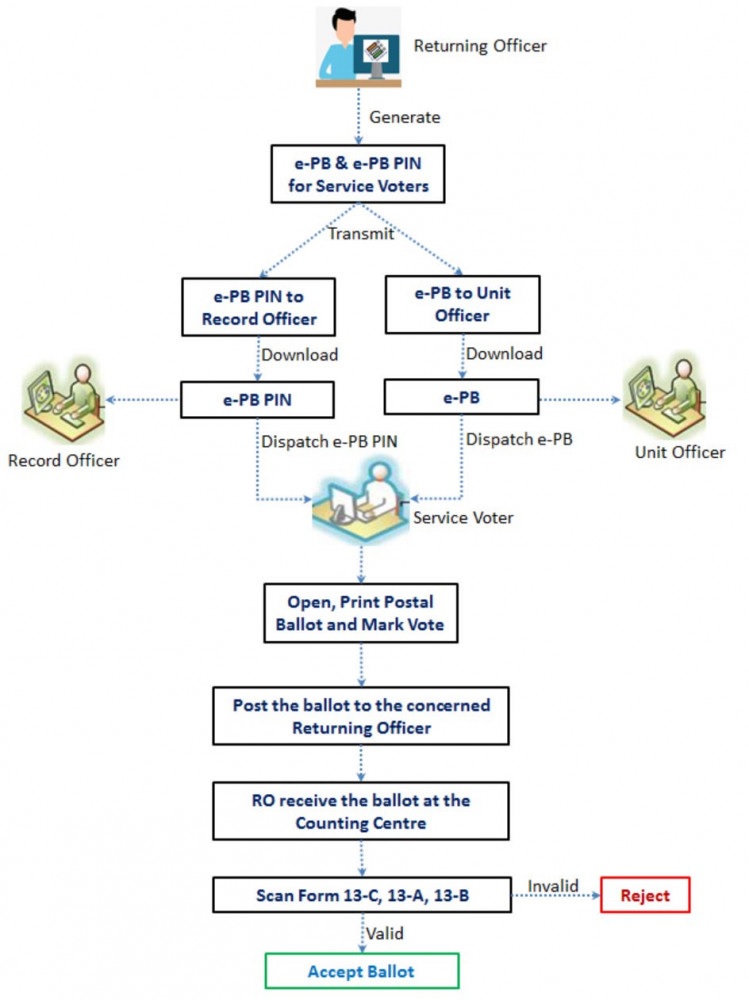 In 2019, 10,84,266 e postal ballots were received through Electronic transmission indicating 60.14% turnout, which is a significant improvement compared to 2014 when turnout was only 4% of service voters turnout.

Persons working in Central Forces under Arms Act and Government officials deployed in Embassies outside the country are, classified as Service Voters and are provisioned for online enrolment.

Out of the total number of Service Electors, 10, 16,245 were from Ministry of Defence, 7,82,595 from Ministry of Home Affairs Central Armed Police Forces), 3539 of Ministry of External Affairs and State Police 267. In the seven phases spanning Parliamentary elections of 2019, total 18,02,646 postal ballots were dispatched electronically using the ETPBS.